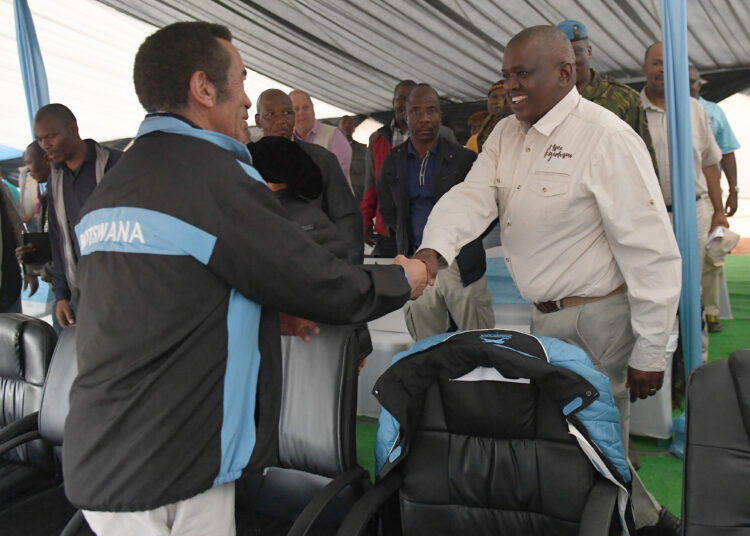 KHAWA 10 May 2019, The Botswana President Dr. Mokgweetsi E.K Masisi and Former President Lt Gen Dr. Seretse Khama Ian Khama shakes hand as they arrive for the cultural night during the Khawa Dunes challenge on 10 May 2019 at the at the Khawa village in the Kgalagadi district. Botswana Tourism Organization (BTO) organizes this festival every year to promote the area as a tourist destination which feature the Quad and Motor Bike challenge traversing the golden beauty of Khawa sand Dunes and culture of Kgalagadi district and the camel race. (Pic:MONIRUL BHUIYAN/PRESS PHOTO)

The escalating tension between former president Ian Khama and his successor Mokgweetsi Masisi may cost Khama and his associates’ lucrative businesses in the tourism sector, The Business Weekly & Review has established.

Government, through the ministries of Environment, Natural Resources Conservation and Tourism and Land Management, Water and Sanitation Services is believed to be exploring possible options to terminate the lease for concession NG16 in the Okavango Delta.

The concession is currently occupied by Linyanti Exploration, a company owned by Khama, Dereck and Beverly Joubert. According to reports, the lease was put to effect in 2010 and will expire at the end of 2025. Linyanti Explorations operates four tourist camps being Selinda, Zarafa, Motswiri and Explorer in the NG16 concession.

Sources state that Masisi wants all if not most of the concessions awarded to Khama returned back to government. “Masisi has made it clear that all concession leases awarded under the Khama administration must not be renewed. As for the NG16 lease, he wants it terminated as soon as yesterday,” said a top civil servant at the Office of the President.

This publication understands that during Khama’s tenure in office, 39 private tourism concessions were awarded around the Okavango Delta by the Botswana Tourism Organisation (BTO), most of which were believed to be awarded to his associates. Wilderness Group is one of the companies that hold several prime concessions in the Okavango Delta. The company is also linked to Khama. In the run up to the 2019 general elections former minister of Transport and now Ambassador to Australia accused Khama of having multiple interests even in CKGR.

Since Khama’s retirement in April 2018, government is said to have managed to take over more than 30 concessions around the Ngamiland region. These concessions have since been given back to the Ngamiland land authorities.

The Business Weekly & Review understands that some the concessions that have been taken back were also previously leased to Khama’s Linyanti Exploration, these are concessions NG23 and NG32 which were given back to the Tawana Land board.

Nonetheless, Khama and his associates are expected not to give up without a fight given the profitability of the tourism business. When reached comment, Khama said he was not aware of any plans by government to terminate Linyanti’s concession lease.   Permanent Secretary in the ministry of tourism Dr. Oduetse Koboto was reluctant to address issues of concession leases.

Rather, he said plans by the government to reclaim some concessions for the benefit of local communities were right on track.

Mr. Kitso Dickson is a Business reporter, Financial Modelling and Valuation Analyst and a financial inclusion activist. He is the current Business Editor at the Business Weekly & Review. As a business reporter, Mr. Dickson has made contributions to the Botswana Stock Exchange Magazine and The Monthly Investor – a South African Financial Magazine.
Mr. Dickson began his journalism career in 2015 as an intern at the Business Weekly & Review. He later joined property magazine Boidus as Assistant Editor and Content Coordinator. He has also worked for Echo Newspaper as Business Editor before returning to Business Weekly & Review. Mr. Dickson is passionate about finance and business reporting. He extensively reports on the financial sector, particularly focused on investments and stock markets.
Tags: Beverly JoubertBotswana Tourism Organisation (BTO)Dr. Oduetse KobotoIan KhamaMokgweetsi MasisiOkavango Delta
ShareTweetPin