As time ticks closer to the Tokyo Olympics, athletes of Team Botswana are yet to receive their COVID-19 vaccine, The Business Weekly Sports has established.

According to the Strategy and Business Development Manager of the Botswana National Olympic Committee (BNOC), Baboni Kupe, BNOC has approached the Ministry of Health and Wellness about prioritising COVID-19 jabs for the Tokyo Olympics-bound. “We succeeded in that and we were given a tentative date that our share of vaccines would arrive sometime this week,” Kupe noted in a telephonic interview with The Business Weekly Sports.

Quizzed if getting jabs from the International Olympic Committee (IOC) is not an option for BNOC, Kupe replied: “IOC is only to aid teams whose governments are not able to give them vaccines. Fortunately for us, our government has agreed to help.”

The question was motivated by the fact that IOC earlier last month accepted an offer from Pfizer and BioNTech to provide COVID-19 vaccines to athletes and support staff ahead of the Tokyo Games.

Athletes like Isaac Makwala, Nigel Amos, Christine Botlogetswe, Amantle Montsho, Galefele Moroko and the men’s 4x400m team have qualified for the Games in athletics while Mohammed Otukile and Keamogetse Kenosi have made cut in boxing.

Asked if BNOC is certain of the country’ participation at the Games after countries like North Korea pulled out of the Games for COVID-19 fears, Kupe said BNOC is working towards ensuring that Team Botswana competes at the Games. “But we will hear from the IOC and the organisers of the Games,” she said. “For now they have scheduled that the Olympics are going to take place and we are going to compete.”

There are fears that pulling out of the Games for the same reason could gain traction as the time nears. UK-based newspaper, The Guardian, has stated that polls in the Nikkei business newspaper found that 62 percent of respondents thought the Olympics should be cancelled or postponed, while 33 percent said they should go ahead with fewer or no spectators.

Meanwhile, according to an updated version of guidelines known as “playbooks” that organisers say will ensure “safe and secure” Games, all participants will be required to record two negative tests before they leave for Japan. Athletes and those with whom they come into close contact will also be tested daily during their stay in the host country.

Athletes will not be permitted to take public transport or visit restaurants but should eat at catering facilities at Games venues and their accommodations or in their rooms using room service or outside delivery, according to the playbook released  after a recent  meeting between the IOC, the International Paralympic Committee, local organisers and the Tokyo and national governments. 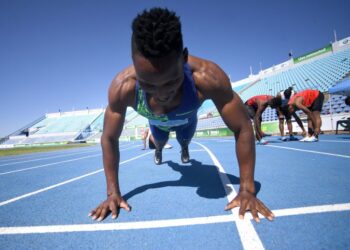